We were recently asked to accompany an inspection on board the " Pearl of the Dane" for a woodworm, wet rot and dry rot inspection. Being a little bit different from the day to damp and timber surveys three of our surveyors couldn't wait to come on board! Seen below are Lee, Alan and Ian on completion of the inspection. 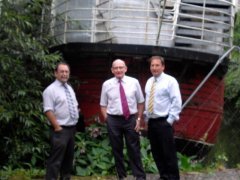 As the river Dane winds its way through the town of Congleton, Cheshire, U.K. an unusual sight confronts you, close to the riverside mill can be found a sixty foot long steamboat moored at the specially designed quay at the river side. The river Dane is quite shallow and unnavigable and as such this large boat seems totally out of place. This large vessel was transported here by local businessman Joe Terry in the late 1990s, it was his dream to open a seafood restaurant. 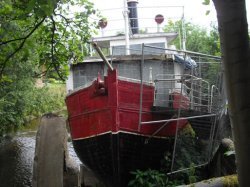 The boat was a former Trawler which had previously been

involved in the Icelandic cod wars and was then  known as the Limanda.  Due to the size of the boat  only the hull was transported to Congleton, the  superstructure was constructed later and made to  resemble a steamboat. Unfortunately the restaurant  was not a success .

However there may be a new lease of life as the new owner now intends to transform her and re-open her as a restaurant again.